Got an iPhone 8 Plus which was unexpected. Huge upgrade going from an old 5. lol

I bought myself some board games. Escape room games, to be more specific.
__________________
Pahn!
“About the only thing Lindsay Lohan and Elizabeth Taylor have in common is that your senses would be assaulted if you spread their legs right now and you’d get some awful disease if you fucked them."

Quote:
I don't know if you're familiar at all with escape rooms. They started as flash games, like Viridian Room, and then evolved into actual real, physical rooms that groups of people go into to solve puzzles and hopefully escape in time.

So what I bought are basically a deck of cards with some other minor props that attempt to replicate this experience. There are various companies making them right now, but my favorites are the EXIT series. Here's a link.

I can highly recommend The Pharaoh's Tomb. I should advise that these are single-play games, in that playing them, you damage/destroy components so that you can't replay or pass the game on to someone else. But still, for 1-2 hrs of entertainment for 3-4 people, it's not a big investment. And you COULD play them without damaging components if you really wanted to. You'd just want a handy copy machine nearby.

In the interest of completeness, I'll mention some others. There's the Unlock series, which doesn't involve component destruction, but which hasn't been as fun for me. There's the Deckscape series, but I don't know much about it. It seems crappy though. And there are random escape room games you can get at places like Target and Walmart. I have no experience with those.

I didn't realize there was a consumer market for at home type escape rooms. I know people who've done escape rooms at work retreats and family fun outtings and stuff. Ive never done any myself.
__________________
SEGA hates me.

Quote:
The EXIT games are benefiting from being nominated for the Spiel des Jahres (Germany's Game of the Year award). Pahn, Meursault's Head, CAP, and probably a few others here have been into board games for a few years now.

Here's my current shelf. There are a dozen or so games that are at the office, on loan, or otherwise not here. 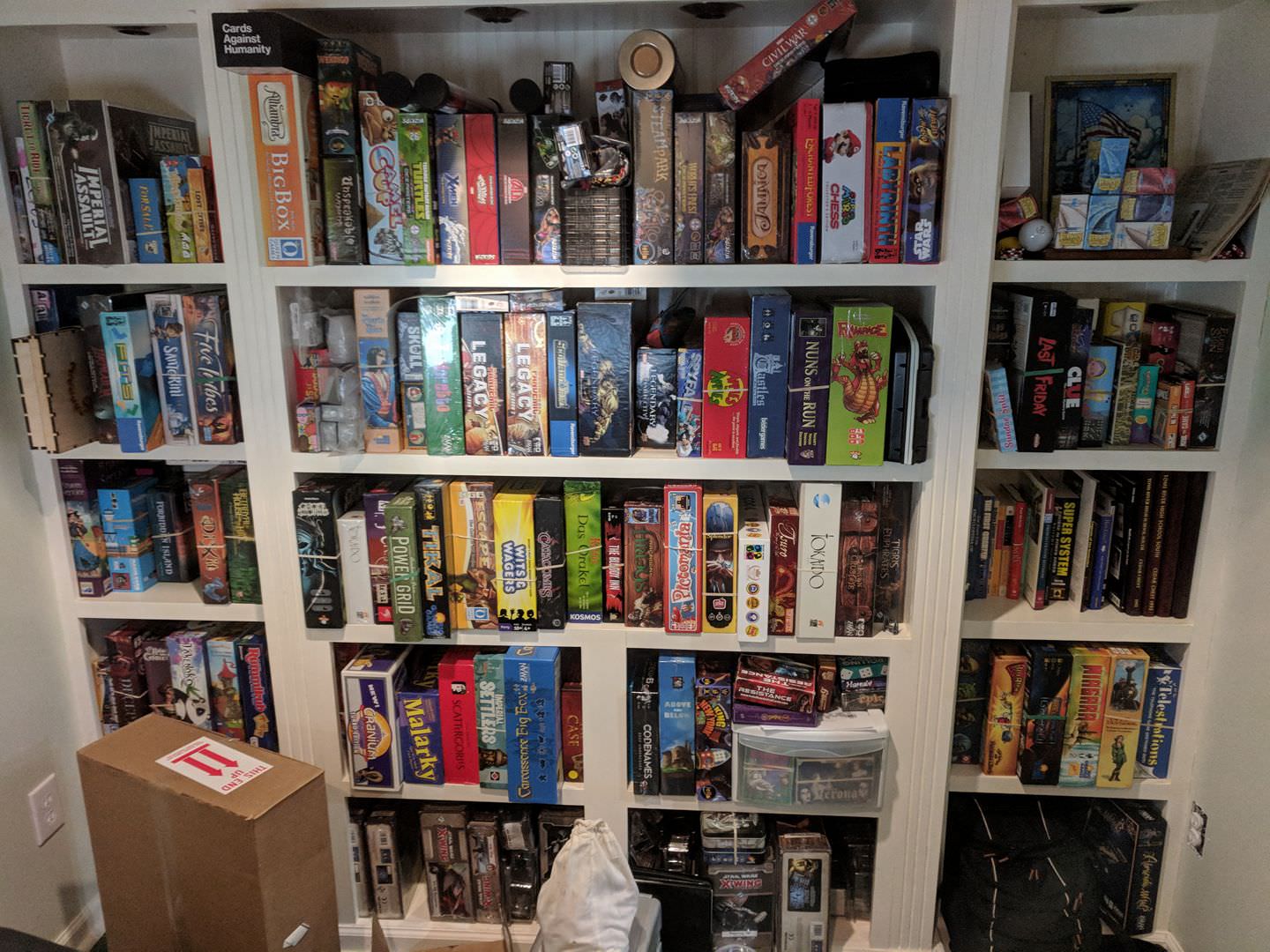 As far as board games go, Santa brought me:
And he brought the kids

Right on Frank! You have a great collection now. It looks like we have a lot of the same taste.

I like that you own both Scotland Yard and Nuns on the Run. SY was a big hit while Nuns fell flat in my group. I also see that Zooloretto is unplayed. What gives?

Lately I've been collecting a lot of old Avalon Hill games. Facebook marketplace has changed the way I collect for the good. I've found some pretty amazing games on it for cheap.

Quote:
I traded my copy away. The art is SO BAD in that edition.
__________________
Pahn!
“About the only thing Lindsay Lohan and Elizabeth Taylor have in common is that your senses would be assaulted if you spread their legs right now and you’d get some awful disease if you fucked them."

Quote:
Nuns was given to me by my brother who often buys games, only to realize he has no one to play them with if his wife doesn't like it. Her tastes are closer to Yahtzee than Catan. This is exactly how I got Catacombs too.

I mostly play games with people from my office. I made the mistake of letting them play Nuns without me. They're very quick to reject a game and they hated this one after a few plays and convinced me it wasn't worth playing. I haven't opened it since then, yet I enjoy Scotland Yard quite a bit.


Quote:
I have lots of unopened games on that shelf and others that have been opened and never played. If you look closely, you'll see Fury of Dracula (3rd ed.) is still sealed. It's selling for ~$150 in that condition right now.


Quote:
I'll have to look, but I'm not much of a deal hunter.

But I mainly buy games from the BoardGameGeek auctions. Of course, like everything else on that site, it's so clunky that it requires third party tools to be usable. So I use http://bgg.activityclub.org/auctions/

__________________
Pahn!
“About the only thing Lindsay Lohan and Elizabeth Taylor have in common is that your senses would be assaulted if you spread their legs right now and you’d get some awful disease if you fucked them."

Quote:
I've traded with people on there before never auctioned. I've found shipping to cost almost as much as the game a lot of times, so unless it's something I can't get anywhere else I won't do it.
__________________